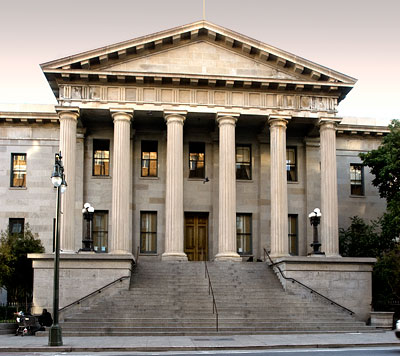 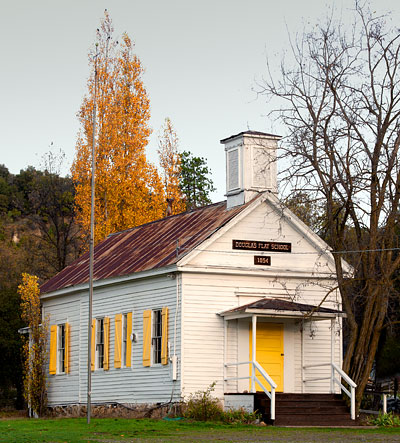 Douglas Flat Schoolhouse in Calaveras County
Built 1854
Photographed 4 December 2012
(Click Photos to Zoom)
The Greek Revival style, which originated in Europe, was derived from the façades of classic Greek temples. Educated Americans, who associated their young democracy with the democracy of ancient Greece, found classical Greek models to be particularly appropriate for public buildings such as courthouses and schools.

Many modest buildings in the West were simplified versions of the grand public buildings and private residences back East. A carpenter could achieve the dignity of a classical Greek temple by turning the building so that the gable faced the street, decorating the façade with a triangular cornice and pilasters, and adding a simple entry porch supported by two columns. Some Greek Revival houses were fabricated back East, and shipped around Cape Horn to the west coast.

Classical Greek models returned to popularity at the beginning of the 20th century as the Neoclassical or Classical Revival style.

The Greek Revival style appeared in the United States in 1798 with a design by William Latrobe, the first professionally trained architect in the United States. The popularity of the style spread quickly due to its political associations (it was seen as the style of ancient democracies) and social associations (it was viewed as a welcome break with the English based Georgian and Federal styles).

Using carpenter's pattern books as a reference, local builders included Greek Revival pediments, cornices, friezes and porticos in modest public buildings while relying on vernacular knowledge of brickwork and woodframe construction to construct details such as door and window frames.

Adapted from the National Register of Historic Places nomination for the Altaville Schoolhouse.