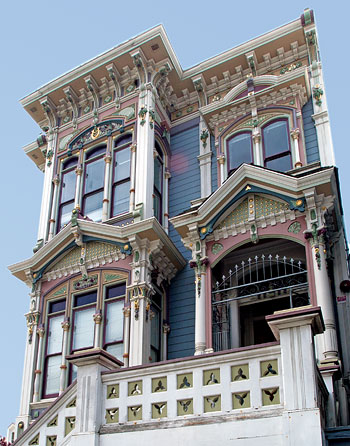 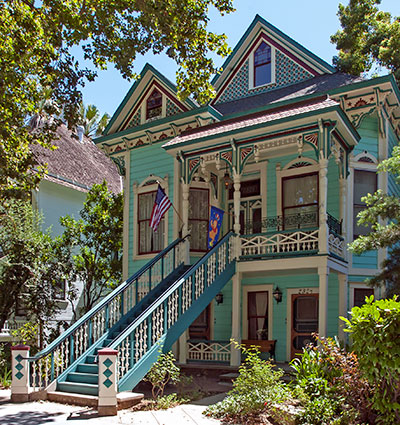 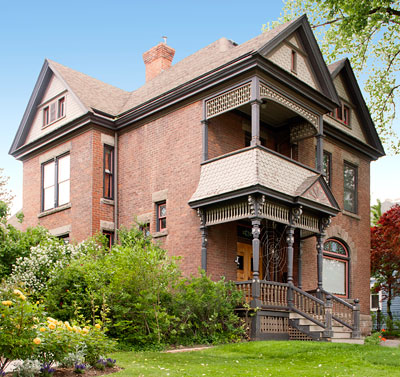 The Eastlake architectural style was derived from a style of furniture design and interior design popularized by English architect Charles L. Eastlake in his influential 1868 book, Hints on Household Taste in Furniture, Upholstery, and Other Details.

Some architectural historians maintain that Eastlake is not actually an architectural style. Rather, it is a distinctive family of surface ornamentation applied to houses built in other Victorian styles such Queen Anne and Stick. Other historians characterize some buildings, or parts of buildings, as pure Eastlake. Porches and verandas were especially suited to the style.

Eastlake is angular, notched, carved. Eastlake rejects the curved shapes of French Baroque Revival Styles. Eastlake decorative elements are made of wood turned on a powered lathe or cut by a powered jigsaw. In the San Francisco Bay Area, the wood was typically redwood.

Lighter elements - spindles, lattice, strapwork - were combined with heavier and oversized architectural members to emphasize the three-dimensional quality of a building. Eastlake components were often ordered from a catalog and assembled at the site.

Some Eastlake houses were painted with traditional earth tones, but others were painted in multiple colors which emphasized the structural and decorative elements. Lighter detail or trim against a darker house body became the norm.