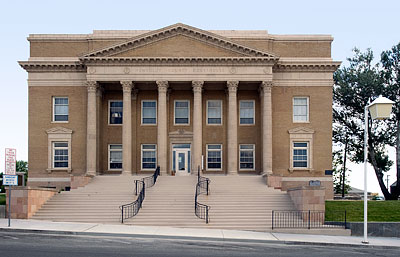 Frederic Joseph DeLongchamps was born in Reno, Nevada on January 2, 1882. He graduated from Reno High School in 1900 and the University of Nevada in 1904 with a degree in mining engineering.

DeLongchamps worked as a mining engineer Inyo County, California, before becoming one of Nevada's most prolific architects. He designed both private and public buildings including nine county courthouses in Nevada and California and held the post of Supervising Architect for the State of Nevada.

Educated in Reno, his first interest lay in mining engineering, but for health reasons, he took up drafting and eventually apprenticed to California architectural firms.

Returning to Reno in 1907, he began one of the most prolific architectural practices in Nevada. More than any other architect, DeLongchamps shaped Nevada's early 20th Century public architecture both in his private practice and as Supervising Architect for the State of Nevada.

Stylistically, he owed much to the Beaux-Arts inspired Classical training he received as an apprentice. He was particularly interested in massing over detail, although he could easily produce highly-textured works such as the Winnemucca courthouse. He adapted readily to changing tastes and later produced fine Art Deco buildings such as the United States Post Office in Reno.