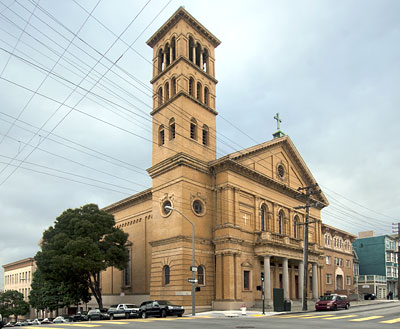 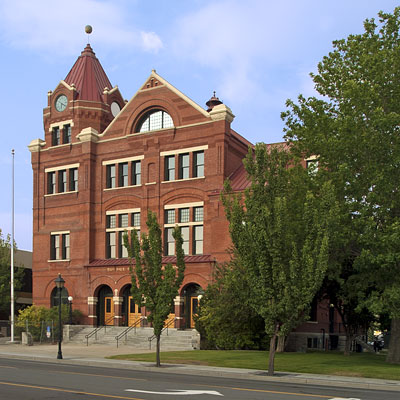 The Romanesque Revival architectural style originated in Europe in the early 19th century. Buildings in this style are based on medieval and early Christian Romanesque cathedrals of the eleventh and twelfth centuries.

New churches, schools, and public buildings were increasingly designed in an imposing variant of the Romanesque Revival style in the nineteenth century in the United States. Diplomats, theologians, educational reformers, clergymen, and rulers supported Romanesque Revival architecture in large part because of the style's many associations with the staunch faith and communal solidarity of the early Christian era.

A later phase, Richardsonian Romanesque, originated in the 1870s in the work of the Boston-based architect Henry Hobson Richardson who attended Harvard and L'Ecole des Beaux Arts in Paris. He was inspired by Romanesque architecture in Spain and the south of France and experimented with these and a variety of other sources to create his own unique style typically characterized as massive, weighty buildings clad in polychromed and rough-hewn stone and punctuated by Syrian arches and sculpted Byzantine capitals.

The style was not used in San Francisco until the late 1880s. Although known by local architects, the style was not initially embraced due to its cost and its use of earthquake-prone masonry construction. Most early examples were designed by out-of-state architects, particularly Burnham & Root, who were early adopters of the style in their hometown of Chicago.

My Reaction to Richardsonian Romanesque Buildings

I can think of only two architectural styles which I find always and everywhere creepy - institutionsl buildings that suck light and joy from the world: Richardsonian Romanesque and Brutalism.

Consider Briarcliff Asylum, the fictional Richardsonian Romanesque building which is the setting of the television series, American Horror Story: Asylum.

Although Briarcliff is populated by psychopaths and monsters and their victims, much of the unremitting dread emanates from the building itself. In The Hollywood Reporter (12/5/2012), Cathy Whitlock examines the Briarcliff sets created by production designer Mark Worthington:

Briarcliff's gothic gloom emanates in part from Worthington's referencing of 19th century architects Frank Furness and Henry Hobson Richardson. "Victorian eclecticism [pioneered by Furness] is this weird melange of styles that were almost grotesque," says Worthington. "The buildings are built for horror. The proportions aren't quite comfortable and nice, which contributes to getting away from the cliche of just another mental hospital." Richardson's style, dubbed Richardsonian Romanesque and characterized by massive arches and rusticated stone walls, was perfected in his 1869 design for the Buffalo State Asylum for the Insane.