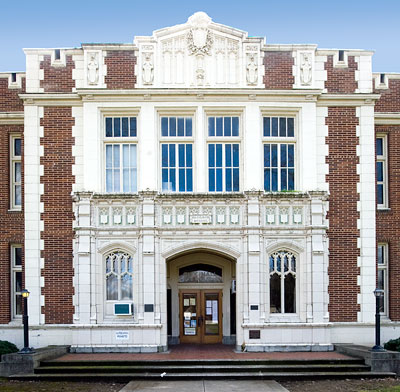 William Henry Weeks designed hundreds of buildings including many schools, banks, and libraries. He was well known for his monumental Greek Revival neoclassical style of architecture, although he also employed other architectural styles. His offices were based in various parts of the San Francisco Bay area throughout his career. Weeks designed hundreds of structures in over 161 Californian cities, as well as several buildings in Nevada and Oregon. Many of his buildings are still in use.

William H. Weeks was one of California's most prolific architects. His works extend throughout Northern and Central California and include everything from a wooden footbridge over the Pajaro River to the exotic Paso Robles Bath House. His style is diverse, ranging from the flamboyant to the plain, from Victorian to reinforced concrete.

Born January 18, 1864 on Prince Edward Island, Weeks moved with his family to Denver where he received his architectural training at the Berger Institute. Weeks opened an office in the new James Flood Building in San Francisco in 1905 and was instrumental in rebuilding that city after the 1906 earthquake and fire.

Weeks designed many Carnegie Libraries. The Evening Pajaronian of May 13, 1908 reported that Weeks had designed more libraries and banks throughout the state than any other architect. His staff grew to more than thirty as he opened offices in San Jose and Oakland. The May 1915 issue of Architect and Engineer was devoted entirely to his work.

Eighteen of Weeks' Carnegie Libraries are still standing. Six are listed on the National Register of Historic Places. Nine of his Classical Revival libraries are extant, including all seven of his temple style buildings: pedimented, columned, mostly of brick with quoins. As a group, these are the familiar "look-alike Carnegies": Gilroy, Paso Robles, Livermore, Lompoc, Richmond, Oroville, and Roseville.