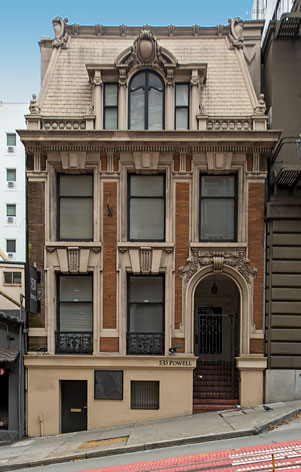 This Second Empire residence, designed by Conrad Meussdorffer, was built of brick, granite and painted terra cotta. To my eye, it is one of the few vintage houses in San Francisco that would look at home in New York City. To the best of my knowledge, it is the only surviving mansion near Union Square.

The second owner of the Perine House was gambler and Republican Party boss Frank Daroux. Daroux bought the mansion for his wife Tessie Wall, who was the madam of successive Tenderloin brothels popular with college men, politicians and wealthy businessmen.

As a prominent politician, Daroux tried to reform his wife while keeping the marriage secret. After a few years of marriage, Daroux divorced Tessie. Tessie shot Daroux three times with her revolver as he stood outside the Tivoli Theatre smoking a cigar.

When Tessie was arrested, she said, “I shot him because I love him, God damn him!”

Daroux did not press charges. Tessie then tried to shoot Daroux's mistress in a restaurant, but she missed.

Tessie was born in the Mission District in 1869. It was said that early in her career, when she was a dancehall girl in a Market Street dive, she had outlasted boxer John L. Sullivan in a drinking contest. Later in her career, in the 1920s, she was the Queen of the annual Policeman's Balls at the Civic Auditorium.

When Tessie died on 28 April 1932, the San Francisco Chronicle reported:

"One more bit of 'the San Francisco that was' has drifted off in that uncharted Sargasso Sea that holds the old Barbary Coast, the Poodle Dog, the Silver Dollar, the Bank Exchange, the Mason Street Tenderloin and those other gay haunts that made San Francisco famous through the Seven Seas."