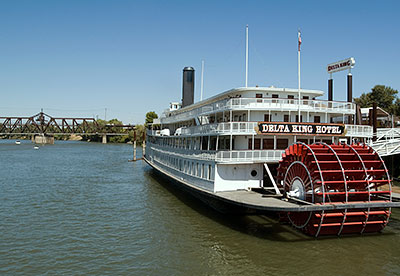 When the Delta King was placed in the National Register of Historic Places in 1978, she was docked in the Sacramento River near Rio Vista in Solano County.

In 1980, she was towed to the Lauritzen Channel near the Richmond Shipyards for renovation.

In April of 1981, the Delta King sank in San Francisco Bay.

She was refloated in June 1982, and in 1984 she was towed up the Sacramento River and berthed in Old Sacramento.

In 1989, after a lengthy restoration, she retired from the transportation industry and began a new career as a theater and hotel.

She continues to work in the hospitality industry at 1000 Front Street, Sacramento.