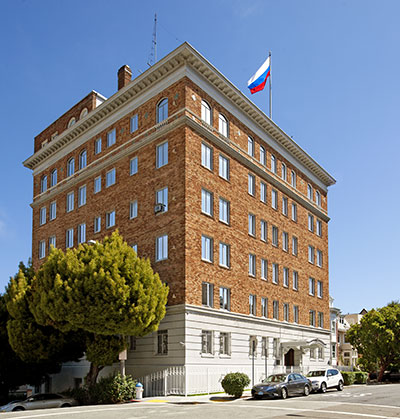 The first Russian vice consul in San Francisco was Peter Kostromitinov who was appointed in 1852. A little more than a decade earlier, a San Franciscan could see Russia from the top of Mount Tamalpais in Marin County.

In 1933, the Soviet Union opened a consulate in San Francisco at 2563 Divisadero Street. The consulate moved several times before buying this building in Cow Hollow in 1972.

According to the San Francisco Chronicle (1 September 2017), "The diplomats at the Russian Consulate in San Francisco have been known to bring plates of delicacies and vodka shots to neighborhood block parties and, for the last few years, inflate a big snowman out front at Christmas."

On August 31, 2017, in an ongoing grudge match between the trigger-happy governments of the United States and Russia, the Trump administration gave Russia two days to close its consulate in San Francisco.

Heather Nauert, a U.S. State Department spokesperson, said: "The U.S. hopes that, having moved toward the Russian Federation's desire for parity, we can avoid further retaliatory actions by both sides and move forward to achieve the stated goal of both our presidents: improved relations between our two countries and increased cooperation on areas of mutual concern."

Nauert went on to say: "Attention. Attention. Black is white. Ignorance is strength. War is peace. The United States is now at war with Eurasia in an alliance with Eastasia." (Just kidding. Alternate facts. It can't happen here.)