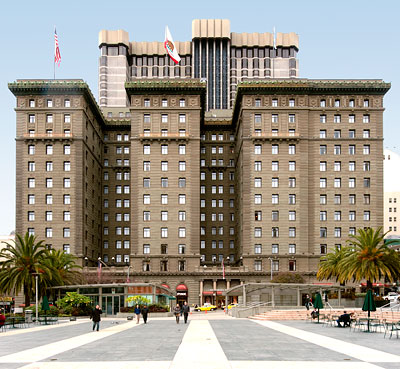 The two south wings of the St. Francis Hotel were built just before the 1906 Earthquake and Fire. The north wing was completed in 1913, initially as apartments for residents. The unfortunate tower behind the elegant, old hotel was completed in 1972.

Charles F. Crocker commissioned the new partnership, Bliss & Faville, to design a luxury hotel for the west side of Union Square. He sent the two architects to Europe to study the finest hotels. According to the hotel's website, Bliss and Faville visited all of Europe's grand hotels - from those in Berlin, Vienna, and Monaco to Claridge's in London and The Ritz in Paris.

In their design for the hotel, Bliss & Faville followed the style pioneered by architect Louis Sullivan in Chicago and created a restrained façade free of the Victorian or Beaux-Arts ornamentation then in vogue. When the hotel opened on March 21, 1904, it became one of the city's most prestigious addresses.

Two years later, just as construction was beginning on the north wing, most of downtown San Francisco was destroyed by the 1906 Earthquake and Fire. The St. Francis Hotel survived with only cosmetic damage. While it was being repaired, a temporary hotel was built in Union Square. The St. Francis Hotel reopened in late 1907 while construction continued on the new residential wing.