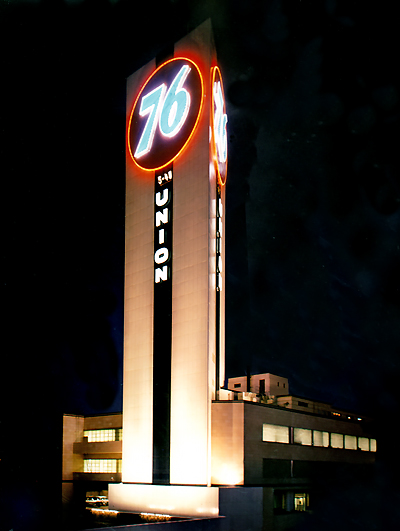 I do not know the provenance of this photograph. It was given to me by a relative who lives in Berkeley, California. Her father was a mechanical engineer who worked on large projects in Los Angeles, Honolulu and San Francisco. He probably contributed to the structural integrity of this building. 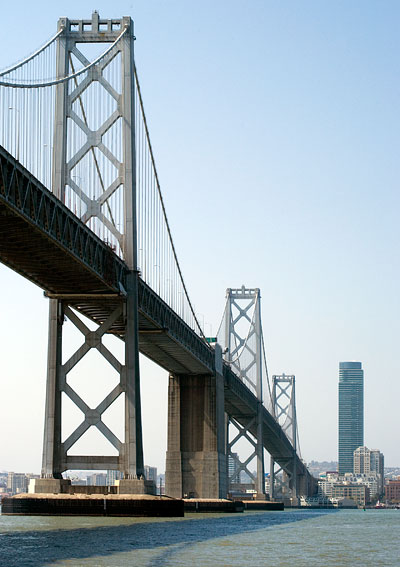 The union Oil Company Building was demolished in 2005 to allow the construction of One Rincon Hill, a residential high-rise.

The following description of the Union Oil Company Building is excerpted from the Final Environmental Impact Report released in 2005:

"The Union Oil Company Building is one of a handful of architecturally important transitional Streamline Moderne/International Style office buildings in San Francisco. It is significant as an early example of an automobile-scaled, programmatic office building in San Francisco and one of a handful built by a private corporation in San Francisco during the waning years of the Depression. It was also one of the only major corporate office buildings to be built outside of the Financial District in its time. Designed and built in 1940-41 by prominent San Francisco architect, Lewis P. Hobart, and expanded in 1953-55 according to compatible designs drawn up by architect Ralph N. Kerr, the Union Oil Company Building is also significant as a programmatic building whose tower over time greeted generations of commuters."

Years ago, ages ago, I was greeted by this marvelous tower when I would drive across the Bay Bridge as fast as Dustin Hoffman in The Graduate.

I was in the Air Force, a hayseed out of Carolina, who had the good fortune to be stationed at McClellan Air Force Base in Sacramento. It was a time when you could hear Big Brother and the Holding Company jam with The Grateful Dead, all night long, at the Avalon Ballroom. Janis Joplin rented a flat two blocks from where I live now.

Sometimes, on a Saturday night, I would drive into San Francisco, exiting the Bay Bridge between the welcoming lights of the Union Oil Company Tower and the Hamm's beer sign with hundreds of incandescent yellow light bulbs which would fill a giant beer glass near Seals Stadium, a preview of The Gilded Cage in The Tenderloin and The Tool Box, South of the Slot.

Today, when I inch my way off the bridge, I see the towers of Blade Runner in a broken city.