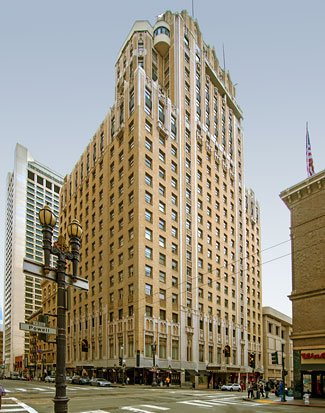 The Sir Francis Drake Hotel, which opened in 1928, was designed by architects Weeks and Day with extravagant public spaces modeled on the European Renaissance of Drake’s era. Through most of its history, the hotel has been famous for its gregarious Beefeater doormen and for the Starlight Room nightclub on the 21st floor.

During Prohibition, a secret room above the elevator lobby stored bootleg liquor from Moss Beach. The lobby ceiling still has peepholes to allow a lookout for police.

Sir Francis Drake (1540-1596) was a privateer for Queen Elizabeth I of England and a slave trader. He was the first English sea captain to circumnavigate the globe in the 1500s. In 1579, he sailed the Golden Hind into Drakes Bay north of San Francisco.

In February 2022, we learned from the San Francisco Chronicle and other sources that the Sir Francis Drake Hotel had become the latest victim of San Francisco's intermittently successful crusade to cancel all dead white males.

The Northview Hotel Group, which purchased the hotel in 2021, plans to change the name from Sir Francis Drake to Beacon Grand, an anodyne name signifying nothing.

According to the new owners, “Everything was done with so much thought for such an iconic property. We are not just changing the name and then quickly changing everything about the hotel. It is all much more intentional than that.” Right. Got it.