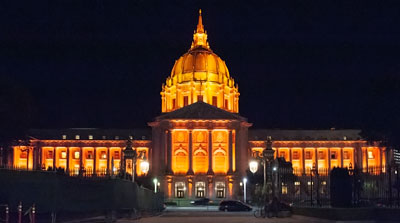 John Bakewell was born in Topeka. Arthur Brown was born in Oakland. Both architects studied at UC Berkeley, and then at the École nationale supérieure des Beaux-Arts, where they met.

After returning to San Francisco, they formed a partnership with Brown in charge of design and Bakewell responsible for the daily running of the business and technical operations.

Their early projects reflect late 19th-century French work, with large-scale elements, lavish sculptural decoration and, in some cases, theatrically rusticated surfaces. Such exuberant features remained a trademark, but by 1912 they were beginning to be tempered by a strong, rectilinear compositional frame.

At its best, the expression fuses the dynamism and expansiveness of French Baroque with the elegant orderliness of designs by Anges-Jacques Gabriel and other 18th-century French Neo-classical architects.

See a listing of projects designed by Arthur Brown after the partnership was dissolved in 1928.