George A. Applegarth was born in Oakland, California, in 1876. He began his career as a draftsman at the San Francisco architectural firm Wright & Sanders.

Applegarth studied under Bernard Maybeck at the University of California, Berkeley. He then attended the École Nationale Supérieure des Beaux-Arts in Paris, where he received his diploma in 1906. Upon his return to the United States, Applegarth formed a partnership with Kenneth MacDonald which lasted for six years. Applegarth then practiced on his own.

Applegarth's major works include residential and commercial projects for the Spreckels family, the California Palace of the Legion of Honor, the Clift Hotel, and the Downtown Center Garage.

Applegarth died in 1972 at the age of 96 after driving himself to hospital when he became ill. 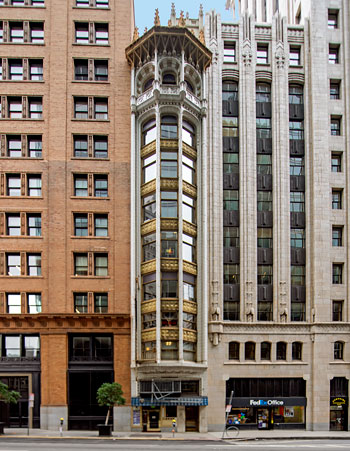 The Heineman Building stands on a lot that is only twenty feet wide. It is flanked by the much larger Adam Grant Building and Shell Oil Building.

It was built as a manufactory for belts, ties and suspenders. Prismatic glass in the windows directed light into the workspaces.

Another skinny highrise, the Roullier Building, is a few blocks away on Kearny Street.