George William Kelham was born in Massachusetts and educated at Harvard and at the École nationale supérieure des Beaux-Arts in Paris where he graduated in 1896.

His first job as an architect was with Trowbridge & Livingston in New York City. The firm sent him to San Francisco in 1906 to work on the rebuilding of the Palace Hotel, and he remained in San Francisco.

Kelham was Chief Architect for the 1915 Panama-Pacific International Exposition in San Francisco. One of his primary design goals was to combine art and nature. As he later wrote in Pacific Coast Architect:

If we have succeeded in combining art and nature so that each seems a part of the other, in bringing the wonderful Bay of San Francisco into our picture, in making our great group of buildings nestle into their surroundings both in form and color, then the real meaning of what we have tried for is made clear.

For several years, Kelham was supervising architect for both the UC Berkeley campus and the UCLA campus. He designed individual buildings for both campuses. 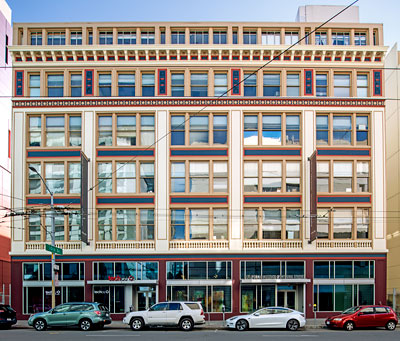 The Gantner & Mattern Company building is an excellent example of an early 20th century Classical Revival industrial building with a high level of architectural detail in its primary façade. The building, which contained Ganter & Mattern's knitting factory and headquarters and wholesale showroom, embodies many characteristics of industrial lofts used for garment and textile factories in the early 1900s.

Industrial lofts were typically constructed of fireproof reinforced concrete and contained production rooms, retail spaces and commercial offices. Manufacturing was on the top floor. Products were transferred to lower floors during the finishing process. Lighting and ventilation were facilitated through operable windows and a sawtooth monitor roof.