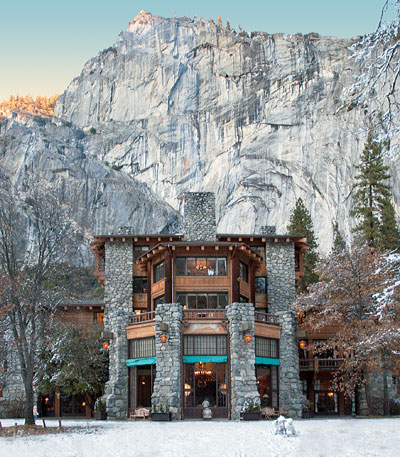 The Ahwahnee in Yosemite Valley
(Click Photo to Zoom)
Gilbert Stanley Underwood was an American architect best known for his National Park lodges.

After opening an office in Los Angeles that year, he became associated with Daniel Ray Hull of the National Park Service. This led to a commission with the Utah Parks Company of the Union Pacific Railroad which was developing the parks in hopes of producing destinations for travelers.

Underwood also designed stations for the Union Pacific, culminating in the art deco style station in Omaha in 1929. Then in 1932, Underwood joined the Federal Architects Project. While working for the federal government, Underwood produced the preliminary designs for the Timberline Lodge, Mount Hood, Oregon, and went on to design more than 20 post offices, two major federal buildings, and the U.S. State Department Building. From 1947 to 1949, he was appointed as federal supervisory architect.