Albert Pissis, who was the first San Francisco architect to study at the École des Beaux Arts in Paris, is credited with introducing the Beaux Arts style to San Francisco.

Pissis was born in Guaymas, Mexico, to a French father and Mexican mother. The family moved to San Francisco when Pissis was six.

In 1882, after his studies in Paris, Pissis and his partner, William P. Moore, designed a number of buildings in the popular Queen Anne, and Eastlake and Classical Revival styles.

He was important in the rebuilding of San Francisco after the 1906 Earthquake and Fire. 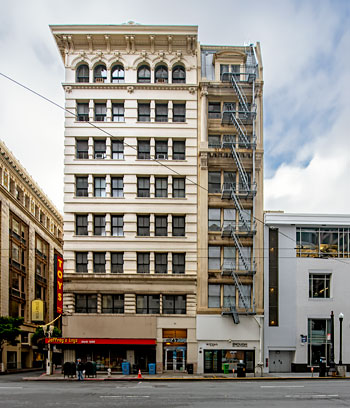 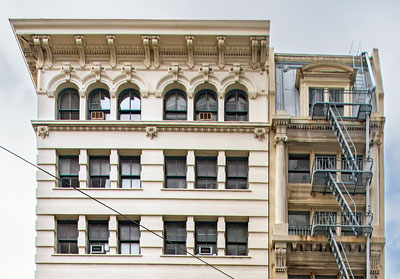 The Oscar Luning Building and the Roullier Building

The Roullier Building is the skinny, reinforced concrete building on the right. According to Splendid Survivors, a book published in 1979, it is one of three downtown highrise buildings that is only twenty feet wide. One of the skinny highrises is the Heineman Building on Bush Street. I don't know what the other one is.

The building on the left, with more conventional proportions, is the Oscar Luning Building designed by Nathaniel Blaisdell and built in 1907. 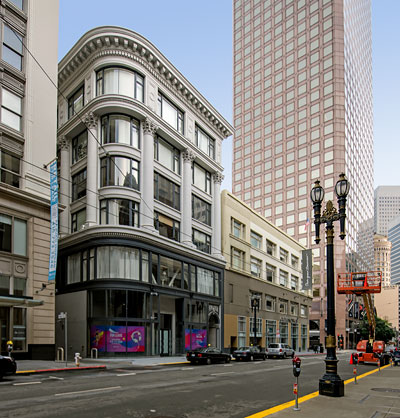 "One of the very best and certainly most distinctive example of urban architecture in downtown San Francisco....The facade curves and the design is carried a short way down a dark, narrow alley....There is a certain mystery about the way the facade turns down that alley as if it were going somewhere, or as if it were a much older building in a newer city which has obscured the structure's full glory."

Pissis had a knack for designing corner buildings. The Hibernia Bank. The White House Department Store. The Flood Building. The Health Sciences Library. 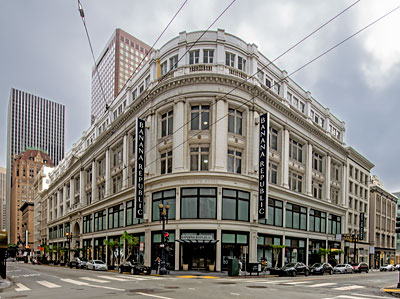 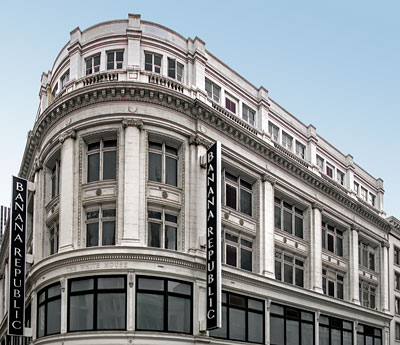