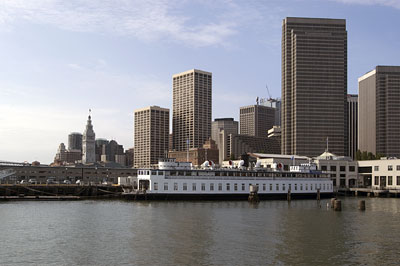 MV Santa Rosa, a double-ended steel class ferry, was built in Alameda in 1927 for Southern Pacific-Golden Gate Ferries Ltd. By 1940, when the newly built San Francisco Bay Bridge and Golden Gate Bridge had largely eliminated the need for ferry service on the Bay, she was sold to Puget Sound Navigation Company, renamed MV Enetai, and reconfigured as a single-ender.

In 1951, she was sold to Washington State Ferries. In 1968 she returned home to the San Francisco Bay Area and retired from active duty.

When MV Santa Rosa was added to the National Register in 1979, she was berthed at the Howard Terminal in Oakland. She was purchased by Hornblower Cruises & Events in 1989, and is now berthed in San Francisco at Pier 3. She is sometimes open to the public for dockside events, but no longer ventures out the Bay.